From The Kilkenny People Newspaper this week....

TEN new full time positions have been created this year at the animation studio Cartoon Saloon as the team of talented artists plough into full production of the €5.5 million feature film Song of the Sea.

More jobs will be created next month as animation work begins on the project. There are 23 full time employees working on Song of the Sea, ten of whom have been taken on since the start of the year. There are also a number of freelance artists working on the project. Full production started at the studio in January and work is expected to continue there until September. Work is also ongoing on three other projects at the studio.

Tomm Moore, who is directing Song of the Sea and who wrote and directed the Oscar-nominated Secret of Kells explained where the concept originated for his latest film.

“When I was working on The Secret of Kells, I was reading a lot of old fairytales collected by Eddie Lenihan and Yeats-era literature that I thought would be lovely to use but was not part of the early medieval world we were creating for Kells. I also spent some time in Dingle with my then 10-year-old son Ben, who ended up being the inspiration for the main character in Song of the Sea.

“While staying in Dingle Ben and I came across some bodies of seals that had been killed by local fishermen, it was quite disturbing. The local lady who we rented our cottage from told us that this practice was now common but would never have happened years ago as people used to believe in the legends of the selkies and thought of the seals as special creatures and it was believed that it would be bad luck to kill them. I found this concept intriguing and when I told the story to Ross Stewart (who also works at Cartoon Saloon) he lent me a book called “The People of the Sea” about the old stories of seal-people or Selkies in Scotland and Ireland. So I began to imagine a story set in the late 1980s when I was child, that included the inspiration from fairytales, Eddie Lenihan’s stories and the legends of the selkies,” said Tomm.

The story tells of the last seal-child in Ireland Saoirse and her brother who are sent away from their light house home when their mother disappears and sent to live with their Granny in the city. On Halloween night they run away to try and get home to the lighthouse in Donegal, their journey home leads them to meet various characters from folklore and they discover the Saoirse is in fact key to the survival of these fairytale creatures.

Tomm explained that the first sketches and ideas go back as far as 2006/2007 when the Art Director Adrien Merigeau started helping out while he was still working on The Secret of Kells as a main background artist. “We worked on the script and raising the finance from 2009-2012 and spent last year on storyboards and preproduction design and we recorded all the voices. We have a great cast including David Rawle (from Mooneboy), Brendan Gleeson , Pat Shortt, Jon Kenny Lisa Hannigan and Fionnula Flannagan. This year its full production of all the backgrounds and animation, we aim to complete the film for a release early in 2014,” he added.

Cartoon Saloon’s first feature film Secret of Kells was nominated for an Oscar. When asked if he has similar expectations for Song of the Sea he answers simply that he will measure the success of Song of the Sea solely based on whether we achieve the goal of making a great film for children. “If we get awards and so on that’s just an added bonus,” he added. 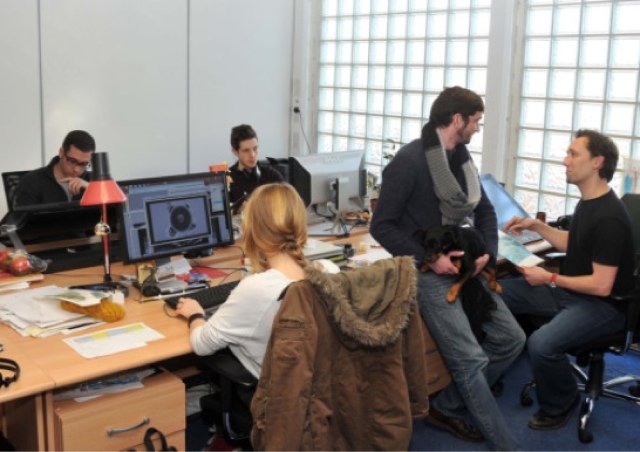