Well 2012 is coming to a close , the studio is closed for the Christmas holidays and everyone is taking a well earned break.
What a year it's been, we finally closed the finance and started preproduction after almost five years of development. We recorded the voices and finished the animatic. We designed most of the films locations and have just about all the character modelsheets done.

Lately we screened the 84 minute cut of the animatic to groups of 8-10 year old schoolkids.
The feedback was reassuring and fun to hear.
All of them enjoyed and understood the story even in its rough black and white form.
It was a long year of rewrites, redrawing and re recording but I think it's left us with a strong blueprint to build our film on next year.
It was especially fun to hear that the kids sang along to the songs and laughed at the right places. Some tears were also reported at the sad parts!
They were given questionnaires to fill out afterwards and those make for some valuable reference as we plough ahead into production.

We have been joined by a great artist lately in the bg dept- Ciaran Duffy , who has been helping our team create the key bgs, also Jeremy Purcell has been designing the water and waves and doing lovely animation tests.

We have a big influx of new artists in the new year , from our partner studios and new hires to bolster our Inhouse team.
We have some old friends and amazing a new talents joining us so I'm really looking forward to it.

Posing,layout, animation and efx all kick off in January and February , it's going to be a whirlwind so I'm having a few lazy days now over Christmas in preparation for the weeks and months of early starts and late nights ahead.

To enliven my wordy post here is an old 2011 concept of a contemplative Conor - characters by myself and colours by Adrien Merigeau ...

Finally this beautiful film was released yesterday.
produced by our old friends at Les Armateurs in coproduction with our coproducers on Song of the Sea Studio 352 and Digital Graphics.

I was lucky enough to see it in Annecy.
Its already one of my favourite animated features - its just perfect.

The talented young director Benjamin Renner has a hilarious blog too - 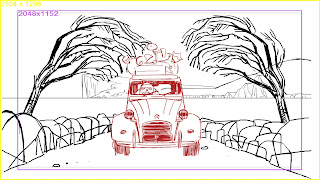 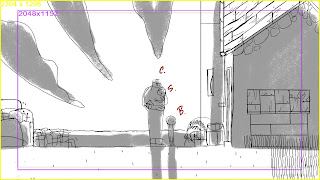 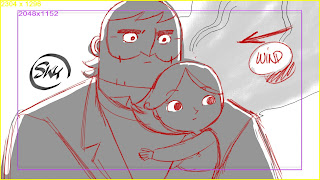 Whats this stage we just entered ? We are calling it "prelayout" .

Denis Lambert and Ettienne William are here from Studio 352 in Luxembourg joining our team , going over the boards and getting us ready for layout.

We are going over each sequence, making final compositions, designing the shots carefully, trying to plan where the wind is blowing from scene to scene, where the light is what efx we need and which dept. will need to make what (handdrawn animation, cg animation or compositing?)

The animatic is down to 84 minutes and I think its working well...and we are all systems go for full production next year...which is only a few short weeks away....

Soul of the Song 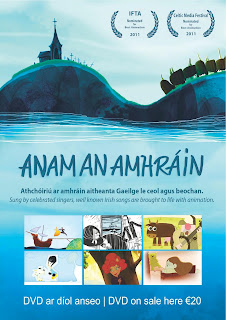 Anam an Amhrain - the Soul of the Song, with animated segments animated ,designed and directed by our finest Salooners, including myself :-)

Great stocking fillers!
Posted by tomm at 3:33 AM No comments:

here you can catch (for the next 28 days only!) the segment we were featured in for the Movie Show on RTE 2.

Brendan Gleeson was amazing as Conor, he really helped us deepen our understanding of the character and even make some decisions about his animated performance as well.

Heres some more photos from the last sessions....

Email ThisBlogThis!Share to TwitterShare to FacebookShare to Pinterest
Labels: Little lucy sings the song of the sea

The Songs of the Sea 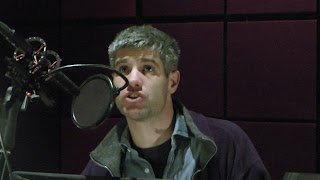 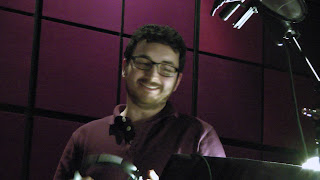 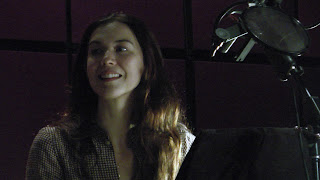 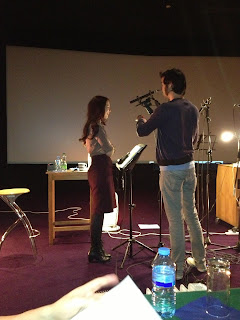 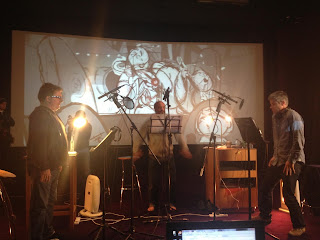 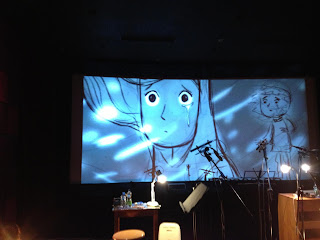 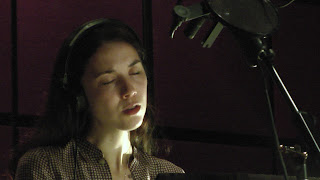 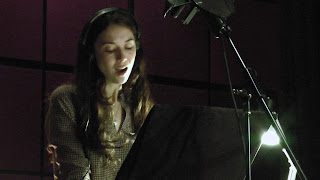 Last week we recorded the Song of the Sea with Lisa Hannigan and some of the other songs and characters with Pat Shortt , Colm O'Snodaigh and Liam Hourican.

Tommorow we record Brendan Gleeson as Conor and some more Ben scenes with David Rawle, on Friday its the younger version of Ben and of course little Saoirse.

Inbetween all this , we are moving ahead with finalising the animatic, designs and creating key backgrounds as we wind up for full production in January.

Brian from Hobsoft is here helping us get our production pipeline well in place and we have a great team working away on the modelsheets, animation tests etc.

Our old comrade Jeremy Purcell will visit on Friday to begin to design the handdrawn Sfx.
Today we have broken down with Serge Ume the composisting work needed to create all the water, wind, fire and magic needed to tell the story.

We had a big coproducers meeting yesterday to try and figure out how we are going to pull off this ambitous project with our limited budget and short schedule.
Jeremy from Superprod in Paris, Stefan from Studio 352 in Luxembourg, Frederik from Noerlum in Viborg, Denmark and Serge from Digital Graphics in Belgium were all in attendance.
I showed them the latest storyboard sequences and we discussed the worksplit and schedule in detail with Thibaut Ruby our line producer extraordinaire.
Its going to be  a challenging adventure with all our creativity being called upon to pull it off.

But with such lovely voices recorded and a storyreel I am more and more confident in I feel its an adventure well worth taking.

Last week we completed the first block of the voice records .

It was a lovely break away from the studio and the stresses of preproduction.
We stayed in Bray by the sea and I got reacquainted with why I wanted to make the film in the first place. Just being able to walk by the sea and and see the horizon stretching off into the distance every morning and evening was refreshing.

Will Collins joined us to help with any last minute ideas or changes to dialogue, his insights and contributions were a big help to Nora and myself.

Fionnula Flannagan was spellbinding in her roles , she recorded on the first day and it was an amazing kick off to the week. Fionnula brought such humanity to the characters and had fantastic suggestions for how to phrase and pitch her lines . She brought the calm air of professionalism and experience to the proceedings and it was much needed as I was very nervous to be finally recording the final voices after four years of writing and boarding.

The finality was a bit terrifying after the ongoing reworking I'd gotten used to with scratch voices.
But Fionnula and the other actors did such great work that I felt shivers hearing it played back on the big speakers , my challenge now is to match their performances with the visuals.

Young David Rawle was fantastic as Ben and his performance will carry most of the film.

David turned 12 that first day too so we had a little party at the end of the records.
He headed off to a premiere with his mum that night ... Chris O'Dowds new film The Sapphires.

I don't remember what I did on my 12th birthday but I doubt it could compare with Davids !

Although he's getting used to working with big stars like Fionnula and Chris he is a lovely down to earth young man and a pleasure to work with.

I'm already looking forward to the rest of the records with him next week.

We also recorded Jon Kennys characters and he brought a warmth and humour to the lines that made the characters his own.

We had a great laugh listening to his impersonations of various west of Ireland characters.

Colm O'Snodaigh was there to coach David and Jon thru the singing parts and as usual he brought his calm zen to the proceedings and coaxed lovely performances from both of them.

Nora was voice directing and was just brilliant , drawing the characters expressions on the script pages to help David visualize what was happening in the scenes, running around and jumping up and down with him to get the right energy.
As the main editor of the animatic so far and in her role as head of story she knows exactly whats needed from each scene and has spent the past week picking the best takes and putting them over the boards so we can adjust them and match them to the actors performances.

Kairen Wailloch was our coordinator for the week and made sure everything ran smoothly and without any stress.

Its six years since Kairen, Nora and I worked in Ardmore on the voices for Kells , which is hard to believe in some ways.

Ardmore is a great space to record in, a big room and no pokey little booths so we could work with the actors very organically and they could see each other and perform against each other.

David is no stranger to the place having just finished shooting the second season of Mooneboy there.

I always enjoy the aura of a live action studio like Ardmore - so much more impressive than an animation studio full of drawing tables and computers!

Here are some of my iphone snaps plus one or two taken by Will. 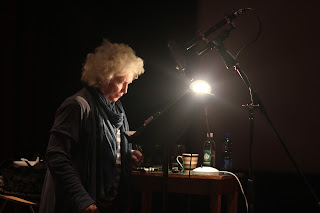 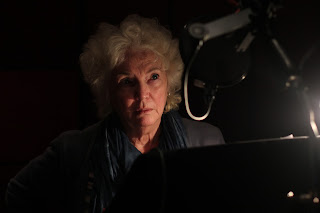