Lately  Fabian Erlinghauser (who is working with me as AD as well as looking after another important Saloon project right now) has started filing and organizing all my sketches and "beatboards" that I drew on paper with pencils and brush pens while we worked on the animatic.
I've posted a few of them here with  a few thoughts on the story boarding process .

I've been really lucky to have  Nora Twomey working as "Head of Story" - shes editing , drawing boards, doing scratch voices , helping with rewrites as well as advising on music and sound effects - whew.
Nora of course co-directed The Secret of Kells and she is a partner here in Cartoon Saloon .


All summer Daniel Christenson was working with us on the first pass animatic contributing lots of ideas and suggestions with his storyboards.
I've also been lucky enough to work with Alessandra Sorrentino who did a lot of key animation on The Secret of Kells on some important sequences,
Etienne Willem from our partner studio in Luxembourg has been doing some great work too and Julien Regnard who has ended up boarding a huge amount of the film , working from my scrawls to build up a working animatic.
Our animation supervisor Sean McCarron storyboarded a couple of sequences  too and early on Rosa Ballester a great designer and board artist helped out as well. 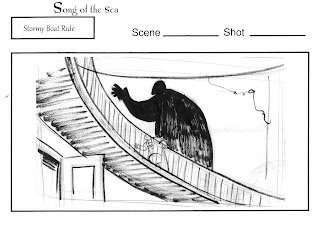 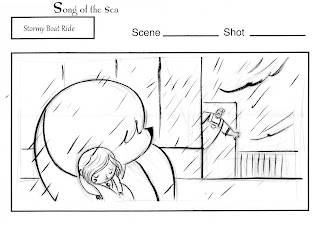 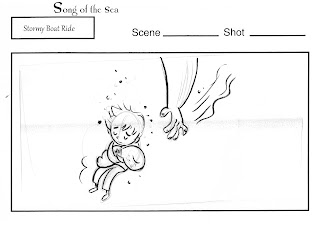 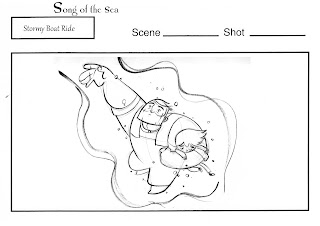 Making the animatic has been a long iterative process where myself and the team draw up a version of the sequence ,then we edit it and put some scratch voices on and try to analysis whats working, whats not working and then start drawing again.
To divide the work I prepare these "beatboards" either as kicking off images I want to see in the movie or as suggestions for retakes.
I think I may be misusing the term"beatboards" actually...but basically I would ask the artists to find ways to work these images or ideas into the sequence, sometimes they last right to the end sometimes they fall away very quickly as we find better solutions in the process of making the animatic.
I did thumbnails for each sequence in the script as well  - trying to give a frame work to build on. 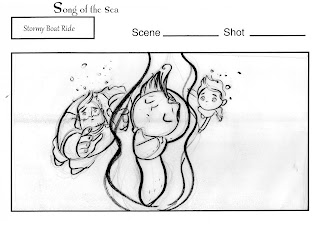 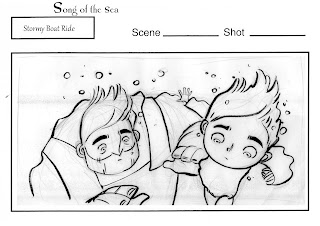 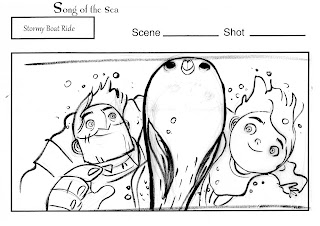 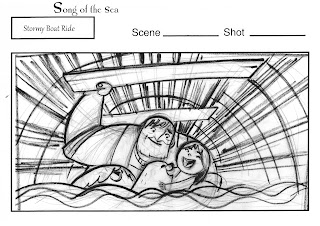 We are nearing the deadline now to finish up and move on to layout. There are a number of sequences still in progress and I really wish we could have another few months to revise and rework everything but the train is leaving the station now.

I've been so lucky this time out that I got a lot of feedback on the first pass animatic from friends in the industry and their notes have really helped tighten up the whole thing.
Will Collins the screenwriter has skyped in on a few story meetings to help us out of tricky spots and has been invaluable giving notes and feedback. 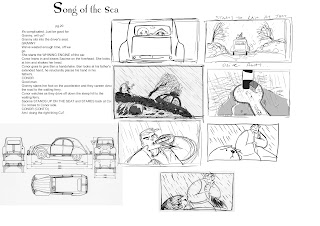 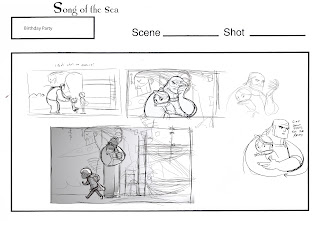 Our biggest challenge over the next few weeks is to edit it down to 85 minutes maximum from the current 97.
We are recording some of the final voices this week in Ardmore and hopefully with those we can start to lock sequences for layout.

Its a challenging ,fascinating and frustrating process and I have come to the conclusion that the film is basically working or not at the rough animatic stage.

I'm heartened by the fact that a number of people who saw an early assemblage of the animatic said they enjoyed it , understood it and some people have even found it already quite emotionally resonant at certain parts.

Nora's young son repeatedly asks to see it when he is in the studio as well.

Given that its just scribbly black and white drawings with scratch music and voices , I'm hopeful we are at least going in the right direction.
Posted by tomm at 11:37 AM